Where is Appledore? FAQs Part 2 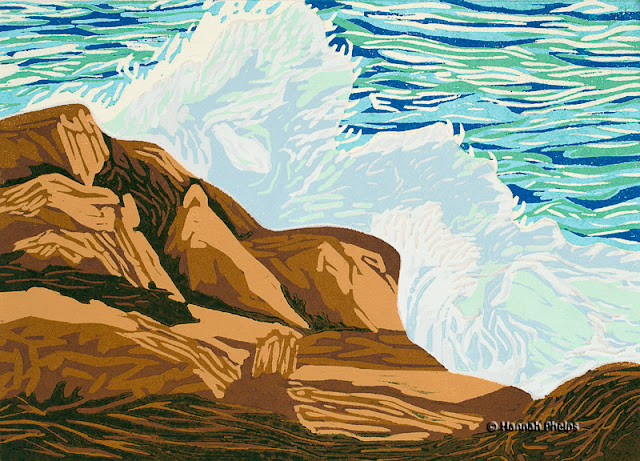 At the Annual Craftsmen's Fair at the beginning of August, my booth was full of seascapes. At least three of them were scenes from Appledore Island, including two of the biggest.

As people looked around, many of them turned to me and asked, "Where is Appledore?"

Growing up, my family's summer vacation was on the beach in Rye, NH and the silhouette of Appledore Island and the Isles of Shoals on the horizon shadowed us wherever we went. Since not everyone shares that familiarity with them, I guess it is time for an explanation.

The real and mythical histories of the Isles is long and fascinating and beyond the scope of a blog post, but here is a brief description to wet your appetite:

While most of the country has no clue what or where they are now, they have a rich history. Settlement on the Isles began in the early 1600's. The cod caught and salted there was world renowned in its heyday.

Later, Appledore Island became the home to Celia Thaxter whose father had built a hotel there during her childhood. As an adult, she hosted famous artists and writers on the island, including painter Childe Hassam. Hassam completed dozens of rocky seascapes and pictures of Celia's flower garden. Many of these paintings are in an exhibit this summer at the Peabody Essex Museum in Salem, MA.

Now Appledore Island is the home of the Shoals Marine Laboratory (SML) which hosts high school and college students every summer while they learn about marine biology, ecology, engineering and other ocean related sciences.

Luckily for me, when the young scientists return to classes there is still enough summer left for SML to offer some adult programs. The art tradition is still alive on Appledore with the Landscapes and Seascapes class that begins this Thursday. I'm one of the three instructors, teaching printmaking, of course, and I feel very lucky to be a part of it all.

After the class is over, I am staying a few extra days to paint the sea, as I did last year. This painting from last summer is the model for the print on the top of the post. Hopefully, I'll have a bunch of new, solid compositions to work from when I return home.

Posted by Hannah Phelps at 3:21 AM No comments: 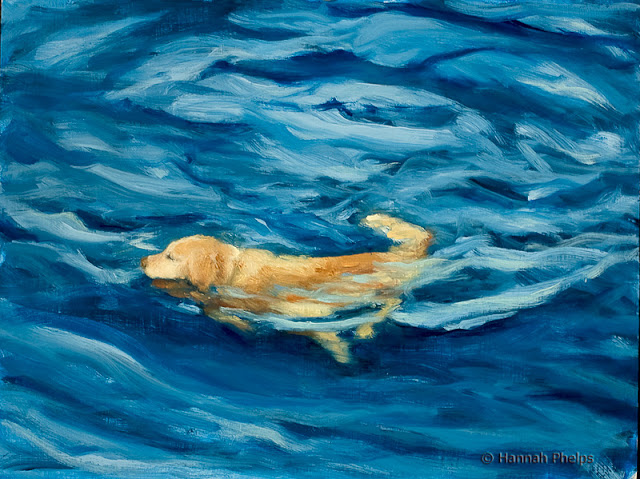 The Other Gold Swimming Phelps, oil on board, 2009, sold


Last week at the Annual Craftsmen’s Fair, my #1 FAQ was not about the artwork. It was about my name.

Specifically, am I related to that other Phelps. The really famous one who is winning even more gold medals in this Olympiad.

The answer is no.

I did used to live in Baltimore, MD back when he was a baby swimmer and had just made his first Olympic team and only people in his hometown had heard anything about him. (So I completely understood this.) I knew recreational members of the Baltimore Aquatic Club, Michael's training ground, who said he was a very nice guy. Alas, I never met him myself.

But like almost everyone else in America, I’m a fan. His accomplishments are incredible and I feel lucky that I was able to enjoy watching him achieve the impossible time and again on TV.

The most memorable of my encounters with hopeful Michael Phelps fans was a little boy who saw the booth sign with my name printed across it in big letters. He stopped, his mouth formed a tight “O” and he sucked in an audible breath.

His father chuckled, looked at me and shook his head, “Ah, no. Come on.”

And he got my standard answer, “No relation, I’m afraid.”

We can only hope that some of these people will love hand-made craft and fine art as much as we all love our gold medalists.

Honestly, though, as I rest up after my first Annual Craftsmen's Fair, I'm finding it hard to be upset about being upstaged by a living legend.

Posted by Hannah Phelps at 8:15 AM No comments:

Get this blog in your inbox!